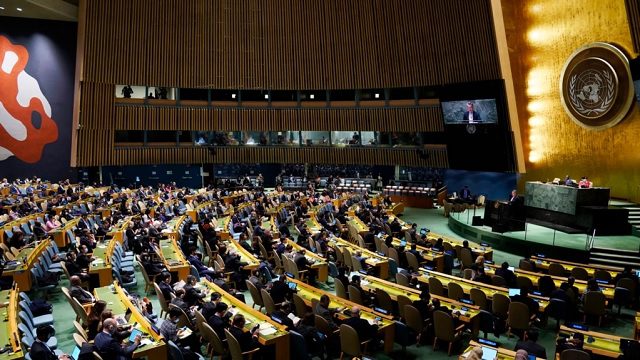 The General Assembly of the United Nations begins work on Tuesday as the world faces multiple crises, starting with the war in Ukraine.

After two years of restrictions due to the coronavirus pandemic, and addresses via video, the UN has asked world leaders to physically participate in the organization in New York.

The death of Queen Elizabeth II has changed the agenda of the summit.

The American president, Joe Biden, who according to tradition speaks on the first day of the summit, this time will participate on Wednesday.

On the first day, French President Emmanuel Macron and German Chancellor Olaf Scholz – the leaders of the two largest economies in the European Union – will deliver speeches.

“This time, Ukraine will be very high on the agenda. It will be inevitable”, said the chief diplomat of the EU, Josep Borrell in New York.

“There are many other problems, we know. But the war in Ukraine has sent shock waves all over the world.”

However, the Secretary General of the United Nations, Antonio Guterres, has called on leaders not to forget other priorities such as education, one of the topics that will be discussed.

“Education is in deep crisis. Instead of increasing opportunities, education is quickly becoming a reason for great divisions,” Guterres said at the summit.

He has warned that the coronavirus pandemic has caused a devastating impact on the learning process, as poor students have not had access to advanced technology.

In a report published earlier this month, the United Nations Development Program said the coronavirus pandemic has set back five years of human progress.

The World Health Organization declared the coronavirus as a pandemic on March 11, 2020.

More than 6.5 million people have died since the outbreak of the pandemic worldwide.

The United States has recorded the highest number of victims, followed by India and Brazil.