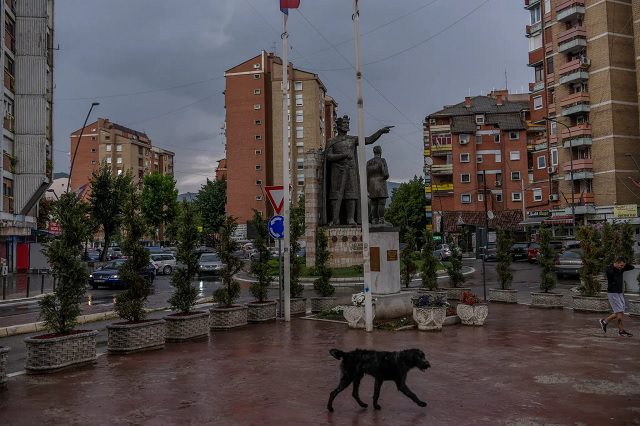 NYT: In north of Kosovo, cheers for Putin can still be heard

Many ethnic Serbs who harbor hatred against NATO in the wake of the 1999 bombing campaign that stripped Serbia of control over the territory (Kosovo) see President Vladimir V. Putin’s Russia as a potential savior.

“Russia is the only hope we have left,” said Milos Damjanovic, a local historian in the predominantly Serbian part of the city of Mitrovica, Kosovo, and a fervent believer that the West and the NATO military alliance were responsible for the fragmentation of Yugoslavia, of which Kosovo was a part until the Balkan wars of the 1990s.

This is one of the statements through which the prestigious medium The New York Times describes the “mood” in the north of Kosovo.

In this regard, the NYT also brings an image on the main road from Mitrovica to the north – near a checkpoint manned by American soldiers, Telegrafi reports.

There, the American medium points out, a billboard assures local Serbs that they are not standing alone against the West and that they still have influential friends: It displays pictures of President Vladimir V. Putin of Russia, Serbian President Aleksandar Vucic and the Serbian star of tennis player Novak Djokovic, who were honored as “honorary citizens” of a nearby ethnic Serb settlement.

As the NYT points out, Putin has not shown up to receive his honorary title, but he still figures prominently in the minds of many residents as a potential and long-awaited savior, the latest in a long line of Russians who, according to Serbs, have worked tirelessly to protect their Slavic “brothers” from hostile foreigners, especially Muslims.

In addition, the American medium points out that in the center of Mitrovica stand statues honoring Prince Lazar and Grigory Scherbina, a Russian envoy to the region who was killed near the city by a Muslim soldier in 1903.

An inscription on the statue of the envoy reads: “A drop of brotherly Russian blood joins the Serbian blood that has flowed for centuries.”

But there is no mention that the Russian envoy was of Ukrainian origin.

However, apart from supporting Serbia at the United Nations and giving diplomatic weight to claims that Kosovo still belongs to Serbia, Russia has offered little in the way of concrete assistance.

By repeatedly citing the West’s intervention in Kosovo to justify Russia’s “seizure” of Crimea and other Ukrainian lands, Putin has undermined the principle of territorial integrity on which Serbia bases its claim on Kosovo.

But, said Marko Jaksic, a former local councilor in North Mitrovica – the ethnic Serb part of the city: “When you lose all hope, you believe in miracles. For many people here, Russia is the last hope of protection.”

In conclusion, most ethnic Serbs, whether they live in Serbia or elsewhere in Kosovo and Bosnia and Herzegovina, see Russia as their friend, not necessarily because they like where Putin has taken his country, but because they hate NATO.

Meanwhile, when asked by pollsters last year who was the “best defender of Serbian interests”, more than 65 percent of residents in northern Kosovo chose Russia and only 3 percent the United States.

The NYT op-ed further considers that North Mitrovica’s role as a bastion of pro-Russian sentiment has created a problem for Vucic, the Serbian president.

He has refused to impose sanctions on Moscow for the invasion, and for years, he has fostered a sense of Serb victimization.

At the same time, however, he has worked to convince the West that he is not on the Kremlin’s “side.”

But wary of being branded extremists and upsetting Vucic’s “balancing act” between East and West, ethnic Serb officials in northern Kosovo offer only tacit support to Russia and deny seeking support from Moscow.

“Russia has sympathy here, but we are not asking for help from it,” said Igor Simic, the vice president of the main political party representing the Serbs in Kosovo.