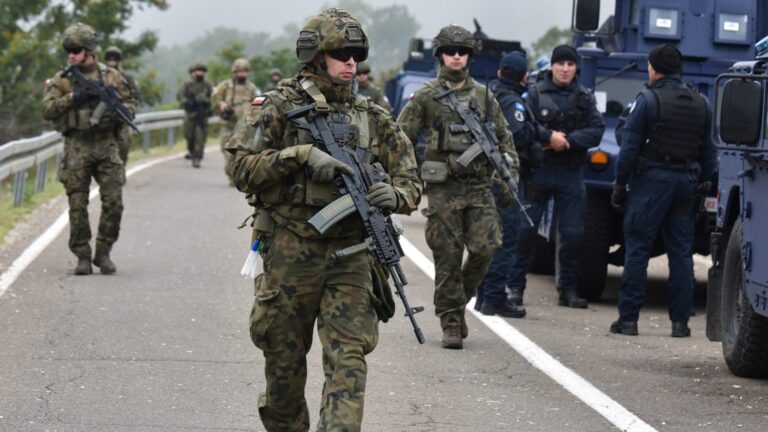 NATO is ready to increase the number of troops in Kosovo, if there is an increase in tensions among the Serbian minority, related to the decision of the Government of Kosovo to register cars with license plates RKS – Republic of Kosovo.

“We are alert and ready to act… if we have an increase in tensions, we can also increase the number of reserve forces… we can make this decision in a short time”, said the deputy commander of the NATO mission in Kosovo (KFOR), Luca Piperni.

He made these statements to journalists at the KFOR headquarters in Pristina.

The situation in the north of Kosovo was tense on July 31, a day before the Government of Kosovo started implementing the decision on entry/exit documents and registration of car license plates in the RKS.

Local Serbs have placed barricades on the roads leading to the border crossings between Kosovo and Serbia – Jarinje and Bernjak.

Due to tensions, and at the request of international mechanisms, the Government of Kosovo postponed the implementation of the decision for a month and the barricades were then removed.

In the meantime, the parties have agreed on the issue of entry/exit documents, while the decision on car registration came into effect on September 1 and will last until October 31.

The authorities in Kosovo have not provided details on how they will act after the expiration of this deadline.

In Kosovo, it is estimated that there are about 10,000 cars with license plates of the cities of Kosovo – mainly KM (Mitrovica of Kosovo) which are issued by Serbia.

Kosovo considers these license plates illegal, since Pristina and Belgrade have an agreement on freedom of movement since 2011.

Piperni said that the situation is currently calm, but fragile, so NATO does not rule out the possibility of new tensions or violence when the car registration deadline expires on October 31.

“We have enough forces to face the situation. With such a number of troops, we can put an end to any type of tension”, said Piperni, referring to the troops outside Kosovo, which NATO can engage as reinforcements.

The authorities in Serbia have said that such decisions of the Government of Kosovo are aimed at expelling Serbs from the north of Kosovo.

However, they have not presented evidence for such claims.

The dialogue for the normalization of relations between Kosovo and Serbia started in 2011.

The parties have signed several agreements, but not all have been implemented.

Kosovo insists that the dialogue be finalized with mutual recognition, while Serbia mentions a compromise solution.