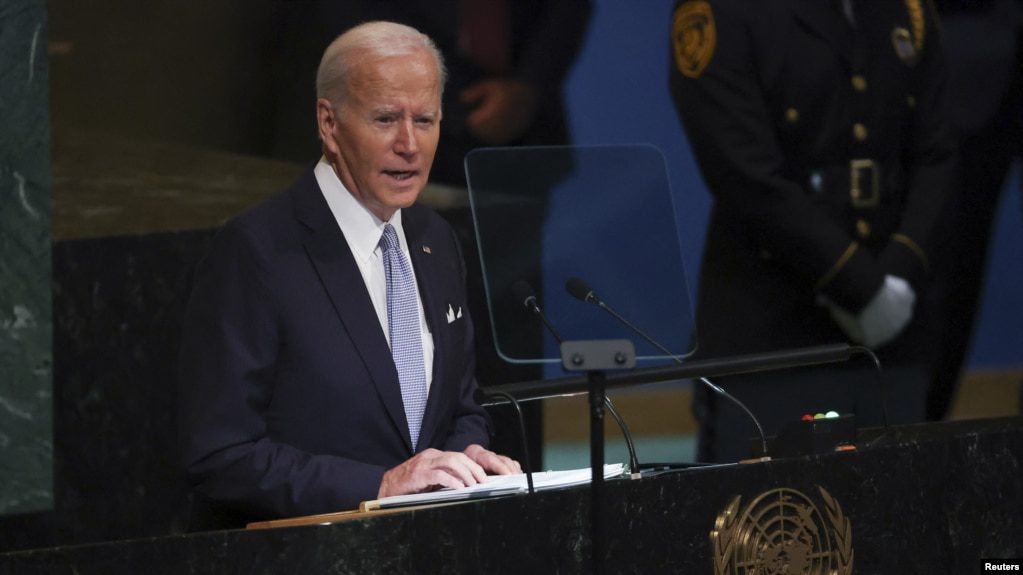 Biden: Putin is trying to wipe a sovereign state off the map

The President of the United States, Joe Biden, said that Russia “brazenly violated the basic principles” of the UN Charter “with its brutal and unnecessary war” in Ukraine.

Addressing the United Nations General Assembly, Biden said Vladimir Putin was trying to “wipe a sovereign state off the map” and called Russian plans to hold “fake” referendums in occupied parts of Ukraine “egregious violations.” of the UN Charter”.

“Putin claims he had to act because Russia was threatened, but no one has threatened Russia and no one, except Russia, wants conflict,” Biden said.

Putin also warned the West that Russia will use all available means to defend its territory and said “this is not a trick”.

According to Biden, Putin made nuclear threats against Europe, adding that Russia is inviting more soldiers to join the war and that the Kremlin is trying to annex parts of Ukraine.

“The world must see these wild actions, as they really are,” he said.

Pro-Russian separatists in Ukraine said Tuesday they want to hold so-called referendums on joining Russia. Voting was said to be held in Donetsk, Luhansk, Kherson and Zaporizhzhia regions from September 23 to 27.

Biden also spoke about nuclear weapons and said that the US is committed to controlling weapons of mass destruction.

“A nuclear war cannot be won and should never be fought,” he said.

He repeated the position that Russia is making unreasonable threats regarding the use of nuclear weapons.

The US president said all countries, whether democratic or autocratic, should speak out against Russia’s invasion of Ukraine – which began on February 24 – and help Kiev defend itself.

“We will stand in solidarity against Russian aggression, period,” Biden said.

The US president said the invasion of Ukraine has had consequences for global food supplies and pledged $2.9 billion in aid to address shortages in food supplies caused by war and climate change.

He also praised the UN-brokered agreement that enabled the resumption of Ukrainian grain exports. Biden said that this agreement, which allows exports through Ukrainian ports, should remain in force despite the war.

The war in Ukraine has caused an increase in the prices of food and energy. Ukraine is one of the world’s largest exporters of cereals.