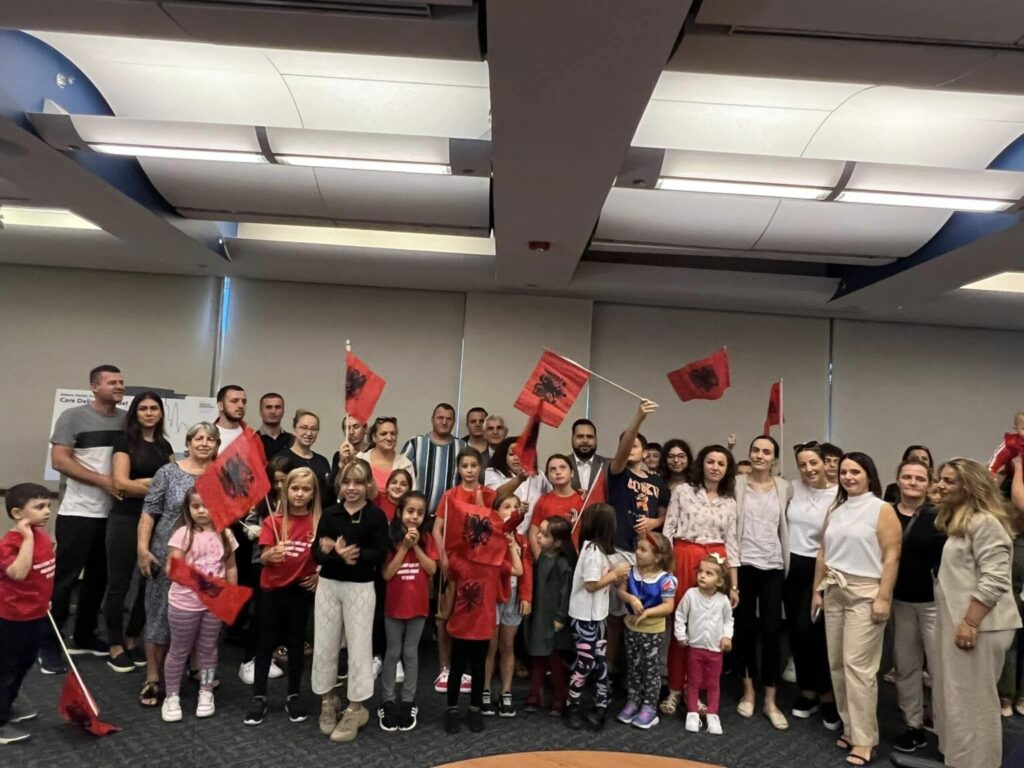 On a bright sunny day, teachers, parents, grandparents, students gathered happily in groups in front of the school to start Albanian lessons, in the premises of the “Illyria” Center provided by Mr. Mark Gjonaj “Honour of the Nation” “.

At the entrance of the school, in front of the banner, balloons with red and black colors, the symbol of the National Flag, were hung, prepared by Mrs. Arta Xhaferri, coordinator of the Bronx school.

Many of them longed to meet and talk about summer vacations. They knew each other and had become friends in the “Alba Life” large family school. Someone had communicated with his friend and his girlfriend, some had come for the first time, such as a girl named Kershize, what a beautiful name, but nevertheless they were connecting very quickly as if they had known each other for a long time, because the world of children is magical. Grandmother Dhurata Maleshka told me that she comes very regularly to bring her granddaughter named Ema to school, we couldn’t wait to start learning Albanian. Your experience has greatly enhanced the reputation and seriousness of this national mission.

The director and founder of Albanian Schools “Alba Life” throughout New York and Online Mr. Qemal Zylo greeted all those present and wished them welcome and good work. Mr. Zylo introduced the promising boy, Mr. Enes Basha, who joined the staff of the Albanian School “Alba Life”. He introduced New York State Assemblywoman Ms. Natalia Fernandez who honored us with her participation in the opening ceremony. Assemblywoman Fernandez was accompanied by Mr. John Zaccaro who hopes to soon have a seat in the New York Parliament. Mrs. Fernandez after thanking all the teachers, students, founders said that New York has many communities and many different languages ​​are spoken from almost all over the world. If we had a school in Spanish like the Albanian school “Alba Life”, I would know Spanish even better, since my parents emigrated from Cuba. Hold fast your language, the language of the ancestors, the culture, the history, the traditions because America values ​​and values ​​them very much, you make it even richer. Teachers Mirvete Krasniqi Veselaj, Dr. Manjola Duli, assistants and helpers such as Davida Hasanaj Drilona Sadikaj, Kendra Duli, etc. took care of the students and their progress at school. The group of dancers beautifully interpreted the Kosovo Independence Dance, while Erza Shala and Leon Gashi interpreted the poem about Mëmëdheu by Cajupi and O Flag Gjak o Flag vulture by Fan Noli.

Parents listened nostalgically to Cajupi’s Motherland, and in the eyes of someone I saw tears of longing rolling down their cheeks, because the Motherland is longing that burns and burns like in this poem:

Mother is also called the earth/ where my head fell/ where I loved my mother/ where she knows me and dry stone/ where I had a home/ where I knew God/ where my ancestors were/ and the graves they put/ where I grew up with crumbs/ where I spoke my language/ where I have a tribe and where I have nothing/ where I laughed, where I cried/ where I live with gas and hope/ where I want to die.

Saturday was a very impressive, successful day and like every first day of school in the memory of the students will be remembered forever.

Congratulations dear students, teachers and parents of Albanian School “Alba Life”, Ambassador of the Nation and everywhere in the world where Albanian is taught!

The Albanian language unites us!