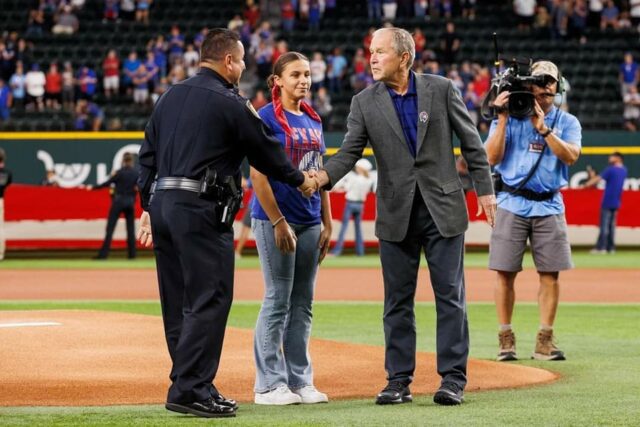 Former President Bush honored September 11, in the presence of the Albanian-American policeman and his daughter

To commemorate the 21st anniversary of the 9/11 tragedy, former President of the United States, George W Bush, was invited to throw out the symbolic first pitch before a baseball game in Texas.

Across America, baseball games were preceded by a symbolic gesture to remember the victims of the terrorist attacks and the heroism of the emergency personnel who gave their lives that day.

The former President was accompanied by an Albanian-American police officer, Gëzim Pollozhani, and his 13-year-old daughter Andita. Pollozhani serves near Ft. Worth, a space where many Albanian-Americans live together with Dallas and its surroundings.

Officer Pollozhani was chosen to honor police officers, firefighters, and first responders throughout the state.

The event was also chosen to commemorate the moment in Game 3 of the 2001 World Series when George W. Bush, who was President when the 9/11 attacks occurred, symbolically threw out the first ball of the game. The terrorists had wanted to terrify America, but tens of thousands of people killed the fear and filled the Yankees Stadium, in the Bronx, New York.

21 years later, former President Bush decided at the last minute not to shoot the ball himself but gave it to the Albanian-American girl Andita Pollozhani. The former President hugged him and gave him some advice in a low voice. The girl then turned and threw the ball at the catcher, who in this case was not a player but a firefighter, Rocky Wolfe, from Killen, Texas.

The event was symbolic for the entire Albanian community in the USA. Among the thousands of victims of this tragedy were three of our compatriots: Mon Gjonbalaj, Simon Dedvukaj and Rrok Camaj.

“The Albanian community in Dallas/Fort Worth – Texas, stands in solidarity with the families of the victims of September 11, 2001!”, was written in a Facebook post of the Albanian-American Cultural Center, in Texas, which also announced the event.

President George W Bush was also the one who recognized the independence of Kosovo, who supported Albania’s membership in NATO, as well as the only US president in office who has visited Albania

During the performance of the American anthem, the former president lined up with the Texas Rangers team that would play with Toronto, at the Globe Life Field Stadium.